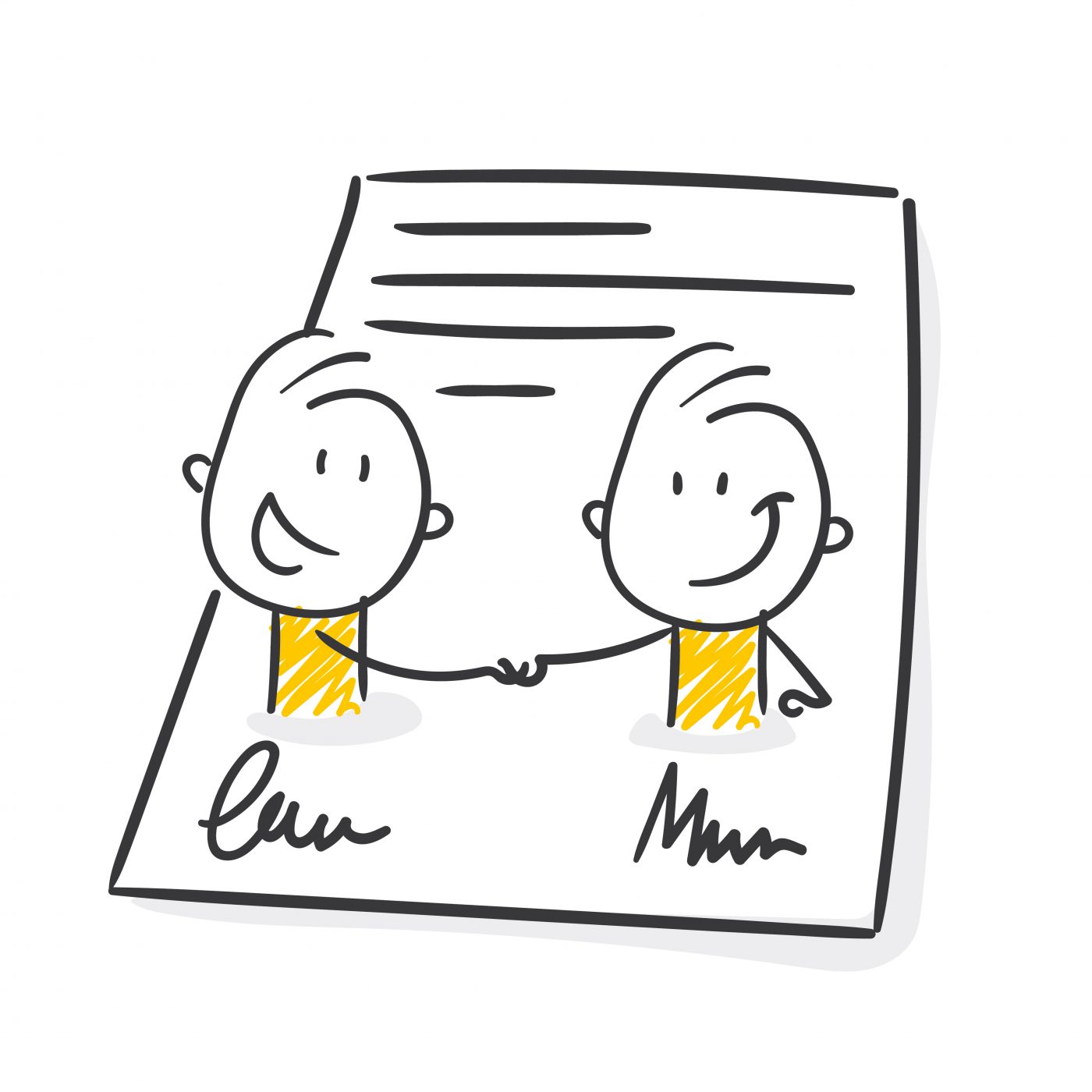 Last time we looked at visual contracts – contracts that incorporate legal design, plain language, and other UX elements to facilitate positive, proactive relationships based on trust and understanding between partners.

While visual contracts have universal appeal, comic contracts often help in contexts where users have language or access needs and require greater assistance in understanding their rights and obligations.

In recent years, there has been a growing understanding of the value of introducing plain-language techniques into contract drafting. Comic contracts take these ideas into the visual realm, removing even more barriers to comprehension.

Professor Camilla Andersen of the UWA School of Law created contracts in comic-book form to help students in UWA Maker’s club – a student engineering society – understand their rights and responsibilities about intellectual property and non-disclosure agreements.

For Professor Andersen, this experiment was “just meant to be a lark”. But after the media picked up on this innovative communication tool, journalists swamped her email inbox eager to learn more about her attempts to make the law “simple and accessible” using a combination of simple words and images.

What is a comic contract?

A comic contract is a legally binding agreement in comic-book form that represents the parties as characters. Pictures capture the terms, with only minimal written text. The parties agree to the contract by signing the comic itself. Sometimes they sign digitally.

South African company, Indigo Fruit Farmers, was the first to introduce a comic-based employment contract in 2016. According to a company statement, “whilst the legal system requires that all employees have an employment contract, it assumes that everyone can read proficiently and understand the contractual terms presented to them.”

This assumption is often incorrect, especially in a country like South Africa, whose low-skilled workers often have language or access needs. According to Robert de Rooy – the lawyer who developed the Creative Contracts brand that worked with Indigo Fruit Farmers – most workers don’t read the contracts they sign because of the daunting language or because they don’t have the literacy levels to understand them.

With this as their starting point, Creative Contracts work with lawyers, designers, and copywriters to create comic contracts that help give “poor, vulnerable, and illiterate people the dignity of autonomously understanding” the contracts they sign.

Employees quickly allayed initial fears these contracts could seem patronising. One worker said they “showed us that we are valued as human beings,” adding that “in other jobs, they just give you orders to work, and they don’t care about you”. She felt that her manager cared about her and her fellow workers. Another worker explained that she was illiterate: “there are words that I don’t understand well, but if I look at this [comic contract] I can understand… and it gives me the power to do my work”.

Creative Contracts’ mission is to bridge the gap “between the document and people’s minds”. The irony here, of course, is that all communication – especially legally binding contracts! – should have this aim in mind. All too often, that isn’t the case.

The Hague Institute for Innovation and Law (HiiL) has acknowledged the importance of the work done by Creative Contracts. HiiL believes that contracts should treat both parties as equal partners to ensure “equal access to justice for all”.

Since most oral contracts are enforceable, even though it’s harder to prove their terms, why should comic contracts be different? Ultimately, this is a question a court would decide in a dispute case-by-case in each jurisdiction. But former Chief Justice of Australia, Robert French, has confirmed comic contracts are legally binding, in principle, if their pictorial meaning is clear and users can interpret them in a legal setting. While the scene has thus been set for a comic-contract revolution, time will tell how popular they become in practice.

Who are comic contracts for?

Comic contracts are for parties who are illiterate, not literate in the language of the contract, or with reading or intellectual disabilities. They can help in companies with multicultural workforces or that rely on migrant or low-skilled labour.

The work of Creative Contracts has inspired other contract designers to implement comic contracts. A research group at Tampere University of Applied Sciences in Finland has been developing social welfare documents in comic form. Welfare is an area in which obscurity in legal documents is a pressing issue. This obscurity can deprive sections of the population of their rights because they can’t understand the legal documents that affect them. “Even a researcher of social welfare legislation does not always understand social welfare documents,” says researcher Laura Kalliomaa-Puha.

This article does not suggest that visual contracts are superior to text-only contracts. Instead, it highlights a complexity spectrum and the need for legal documents to align with the needs of those they intend to serve. While visual contracts are a great way to do this, so is using plain-language principles generally, especially given the cost of producing contracts in comic-book form.

As we’ve seen in our post on visual contracts, using plain language doesn’t just help people with access needs understand their responsibilities but is useful at all levels of complexity in labour, commercial, and other scenarios.

If you’re a lawyer or legal designer needing plain-language writing, editing, or translation services, get in touch today. Let’s give clients the access to justice they deserve (and are paying for)!